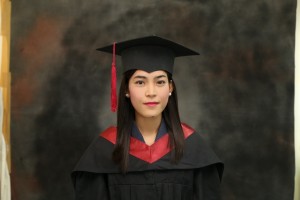 She talks fast. A petite girl wearing a shirt and jeans emerged from the doors of the office looking fresh despite the scorching heat from the sun on a late morning and greeted everyone with a timid smile.

Lyka Jane Ruiz, 21, is a graduate of Bachelor of Science in Secondary Education last April 2016. Fourth among 10 siblings, Lyka says that their family get by with what they have.

From the island barangay of Bangkal in San Jose, Occidental Mindoro, her father, Tatay Roy, works by ferrying people from their island to the proper of the municipality. Lyka’s mother, Nanay Nancy, helps their father in selling whatever product is in season like uling, sinegwelas, etc. Her mother is also a barangay councilor.

The Ruiz family became part of the Pantawid Pamilya program in 2013. It helped the family in its expenses as well as their family relationship. The change in the outlook in life can be attributed to the constant attendance of the couple in Family Development Sessions. Discussions on family relationships were tackled and talked among community members with the help of the staff.

It was how the people in their island look at things that need to be changed. Lyka also recalls that their neighbors used to say negative things to them like they might just get pregnant or will marry at an early age since most of them are girls. But Lyka did not let these negativities put her down.

Instead, she proved not only to the people around them but also to herself that she can make her way and achieve her dreams. She used this as a determination to push further and study hard. “Na-motivate ako na i-continue po yung pag-aaral ko. Everytime na may bagsak ako sa exam ko, napu-push po akong mag-aral, yun po yung pinagtutuunan ko ng pansin,” recalled Lyka.

Not an easy road

After high school, Lyka wasn’t able to pursue college right away. She stopped for a year. At that time, her second eldest sister is studying in college while the next is taking midwifery. Her father could not provide for them at the same time.

Instead of staying at home when she stopped, Lyka used her time to help and earn at the same time. She worked as a part-time preschool teacher in Bangkal Elementary School. She was able to receive Php1,500/month for the four months that she worked there.

Before the start of her school year as freshman in college, after working as part-time preschool teacher, she went to the proper of San Jose and worked as a waitress in an eatery. She worked at night for four months. But since she can’t balance her work and studies, she stopped working. Lyka’s tuition fee during her first year was free where she received a scholarship from the local government. However, during her second year, her father paid the tuition in full.

She was in sophomore year when they became part of Pantawid Pamilya. It assisted them greatly in terms of her younger siblings’ needs in school. Lyka narrated that her father is strict in their expenses. There were times that she becomes stressed just thinking where to get the money for her school expenses. Fortunately, another blessing came to them.

Lyka was a junior when she became a beneficiary of the Students’ Grant-In-Aid for Poverty Alleviation Program of the Commission on Higher Education (CHED) allotted to the children of Pantawid Pamilya beneficiaries.

Beneficiaries of the now Expanded Students’ Grant-In-Aid for Poverty Alleviation Program (ESGPPA) will receive a maximum of Php60,000 for tuition fee, textbooks/learning materials and allowance (transportation, board and lodging and other school supplies).

She is currently reviewing for the Licensure Exam for Teachers (LET). She hopes she will be able to find a job soon to be able to give back to her parents and help in house expenses.

She hopes that the young ones today will believe in the seemingly impossible things that the world has to offer. She hopes they will believe that good things will happen to them. “Huwag pong susuko. Kahit everytime po na madadapa, push lang ng push. Kasi kahit isipin mong gusto mong mag-give up wala naman pong mangyayari. Yung ipagpatuloy lang po yung pangarap,” ended Lyka. Just like what she did when she turned negativity to success. ###