It had a scorching heat that day. Arthur, 33, and Jennelyn, 32, were inside the municipal office of Pantawid Pamilya, silently waiting. Reluctant at first, the couple showed little of their smiles. But as asked gently and pushed deeper, the goodness of their hearts emanate.

Little by little the Masalansan family from Sta. Cruz, Occidental Mindoro recounted the changes in their lives since they became part of Pantawid Pamilya in 2008.

Living in a mountain is difficult. The Masalansan family attests to that. Relying on ‘kaingin’, a method of clearing land by slashing and burning bushes for cultivation, is not enough to earn for your family. Also, not owning lands to tend as farmers, Arthur and Jennelyn have to constantly rent to plant crops and with that alone diminishes the earnings they get to pay the landlords.

Before becoming part of Pantawid Pamilya, the family lived in walls sewn in sacks of rice or “tagpi-tagping bahay” as what they call it, making it more difficult for everyone especially during rainy season. They also do not have water source in their own home. They have to walk for almost 500 meters to get to their neighbor with a water pump. It was like that for the family for many years until aid came. 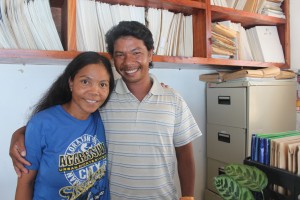 The group where the Masalansan belongs is the Mangyan-Alangan. They resisted the assessment of the enumerators in 2008 since they have long history of protecting their domain from prospective mine conglomerates. Arthur recalls that Jennelyn together with the ‘Kuy-ays’ or elders from the tribe stopped the DSWD staff before and demanded to show proof that it is a trusted program in fear of letting mining enter their area.

True to their intentions, the program proved to help the people in need in their area and the Masalansan being included. The cash grant that they receive provided support to the family. It did not fully answer to their overall financial needs but it can afford the needs of the children. The positive impact it brought to them that even Arthur smiles when remembering it is that they were able to give additional food or allowance to their children when they now go to school.

He further said that sometimes their children would be just satisfied looking at the food stalls and they weren’t able to eat merienda like ‘banana cue’. But now, they are able to give at least 20 pesos. Arthur’s faced lit up and considered it a big deal for them. Sometimes, since they can now provide rice for their children, their allowance is allotted to buying viand at school.

It not only the cash grants that the family is grateful for. It is also because of Pantawid Pamilya that the family was able to receive the Self-Employment Assistance – Kaunlaran (SEA-K) or what is now called the Sustainable Livelihood Program (SLP). SEA-K aims to enhance the socio-economic skills of poor families through the organization of community-based associations for entrepreneurial development.

The prioritized beneficiaries of the then SEA-K are the Pantawid Pamilya beneficiaries. This is to assist the upliftment in the level of well-being of the beneficiaries from survival to self-sufficiency. The Masalansan was one of the families who were granted a capital.

They received a capital of 7,000 pesos and they were fortunate that Arthur’s brother-in-law offered his land to till for free. Arthur could not be more than grateful and thought that luck was really on their side. They do not have to pay for the rent of the land so when the harvest came, they got the earnings in whole.

The Masalansans received the earnings of their harvest in full. They earned at around 30,000 pesos. They saved the 20,000 pesos and used it to repair their house. They are able to cement the half of their walls even just a small portion. “Kahit maliit lang, hindi na tulad ng dati na ang bubong namin ay kugon. Mahirap po kasi ‘pag umuulan,” told Arthur. For them, it has brought them a big change and motivated them to work more and better themselves.

The remaining 10,000 pesos from their first harvest were allotted for buying rice crop since it is a different planting season. Since they cannot use his brother-in-law’s land, the couple found another land they could rent. The portion was given to the land’s rent while the remaining 8,000 were allotted for the seeds and fertilizers.

While the family is doing this, they are still doing ‘kaingin’ to sustain the expenses of the family. “Sa amin naman po kasi, makapagbenta ka ng saging, may pambili ka na ng asin. Pag may talbos ka, may ulam kana,” added Nanay Jenelyn.

The hard work of Jennelyn and Arthur paid off. They were able to earn big and saved up 10,000 from that earning to fix their house again. “Hindi po kami magkakaroon ng ganung bahay kung hindi po dahil sa programa ng DSWD,” uttered Jennelyn. They now have a water pump inside their house and are planning to build a proper toilet.

A stable home is what every family wants and the Masalansans had it. It is not grand but it serves its purpose of keeping a loving family sheltered and safe.

The Department did not only change the family in terms of financial capability but more importantly with their way of looking at life. With the help of the Family Development Sessions which Arthur and Jennelyn attend together, the couple changed their attitude towards things particularly in the health aspect for the children.

“Noong wala pang pantawid, hindi po namin naiisip na kailangan manganak sa hospital. Takot po kami, takot. Pero ngayon hindi na,” said Arthur. He added that it is the culture of their parents to give birth in their own homes.

Jennelyn tells that that they are reminded during FDS that should give birth to a hospital or a clinic that is why when they had their recent sixth child, “Kahit gabi po, humanap po kami ng sasakyan para lang makarating sa clinic at hindi tulad noon na sa bahay lang,” recounted Arthur.

Even their relationship as a couple was change positively because of attending the FDS. Arthur admitted that he used to drink a lot. Whenever he sees his friends, he will buy alcohol instead of food for the family.

The couple doesn’t want their children to experience the life they had all throughout. They never thought that they can have a good life. And it felt good.

True to its goal, the program continuous to cover more poor families since its implementation in 2008. More than 4.4 million households are now served by the program nationwide hoping to provide a new foundation for better lives just like what the Masalansan family experienced. ###