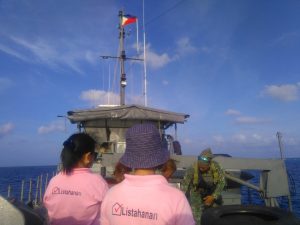 BALABAC, Palawan- Adhering to the Department’s regional theme of reaching the unreached and the isolated, the Department of Social Social Welfare and Development (DSWD) MIMAROPA has completed the validation of some 623 households in barangay Mangsee in this town.

The validation spearheaded by Listahanan is part of the government’s mechanism to identify potential and qualified beneficiaries of the Unconditional Cash Transfer (UCT) program under the Tax Reform for Acceleration and Inclusion (TRAIN).

Listahanan is the government’s effort to map out who and where the poor are nationwide.

“The UCT program aims to assist poor families that will be affected by the rising prices because of the implementation of the new tax reform system,” said Listahanan Regional Coordinator Ernie Jarabejo.

On the other hand, the Department has partnered with the Naval Forces  West (NAVFORWEST) of the Philippine Navy  during the conduct of said validation on March 25- April 1, 2018.

The same validation was completed in the town of Cagayancillo where 67 households are validated.

Mangsee in Balabac and Cagayancillo are both categorized as geographically isolated and disadvantaged areas (GIDAs) in Palawan.

As of this writing in MIMAROPA region, 57.53 percent of the total target or 53,383 households were completely validated. The validation is expected to end this month regionwide.###