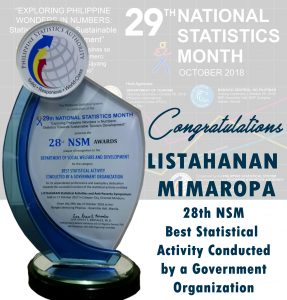 The award was given by the Philippine Statistics Authority (PSA) under the 28th NSM Awards.

Jason Eco Oliverio, information officer for the Listahanan (Talaan ng Pamilyang Nangangailangan) of the regional field office, said they received the award for holding the “4th Listahanan Anti-Poverty Symposium” as part of the statistics month celebration on October 17, 2017, in Boac, Marinduque.

The theme of the symposium last year that gave them the award in 2018 is “Answering the Call of October 7 to End Poverty: A Path Towards Peaceful and Inclusive Societies.”

The symposium was held in cooperation with the Marinduque State College (MSC) in commemoration of the United Nations (UN) International Day for the Eradication of Extreme Hunger and Poverty.

He said it is a call “to end extreme hunger and poverty along with the Listahanan initiatives in increasing the awareness of MIMAROPA residents on the regional profile of the poor, providing all stakeholders a solid and evidenced-based statistics according to the nationwide household assessment results.”

“Receiving the award means the DSWD MIMAROPA Listahanan has shown significant and distinct initiatives and contributions to popularizing statistics through the holding of symposiums that give a face to their content,” he said.

Based on the Listahanan 2015 database, out of 584,562 households assessed and validated regionwide, an estimated 221,324 or 39 percent have been identified as poor.