With courage and determination, a Mangyan Parent Leader from Bansud, Oriental Mindoro showed that no mountain is higher than her desire to help her people. For her, poverty cannot dishearten a woman filled with passion and commitment to serve even in the midst of a pandemic.

Haydilyn “Haydi” Dimaano, 37, belongs to the Bangon Mangyan tribe who lives in the mountains of Brgy. Rosacara, Bansud, Oriental Mindoro. Before becoming a Parent Leader, she has been serving the Uyugan Bangon (Group of Bangon Tribe) — a group organized through the Pamayanang Mangyan Ugnayan, Inc. (PMUI). As the secretary, Haydi leads different development sessions that aim to empower Indigenous Peoples (IPs). Her fellow Pantawid Pamilyang Pilipino Program (4Ps) beneficiaries have seen her passion to help. Hence in 2018, she was chosen by the beneficiaries to lead their cluster in Bansud.

Even before the pandemic, Haydi is already known in their tribe for being resourceful. She can quickly think of solutions to the challenges her community faces. In September 2019, she initiated the cooperative called Ufudan Mangyan 4Ps (Ufudan is a Buhid word that means group). It was initially formed to address their problem with expensive and low-quality rice. Thus to answer the call, Haydi helped the Mangyans to access good quality and cheaper rice.

Months after, the transaction between the rice supplier and the Mangyans went well. In return, the supplier has offered Haydi`s tribe a discount on every sack of rice her fellow beneficiaries will purchase. “May ibinigay po sakin na Php 2,000.00, pero sabi ko po, sa grupo ito [money]”. Instead of taking this as an advantage, the Mangyan parent leader has seen this as an opportunity for Ufudan Mangyan 4Ps to generate savings for their group. Haydi informed her fellow beneficiaries about the discount they will get which will directly go to the fund of their group. “Ngayon po nasa Php 41,000.00 na ‘yung pondo namin. Sabi ko po sa kanila, dapat magkaroon kami ng mapagkakakitaan kahit wala na kami sa 4Ps. Pag-uusapan pa po namin pero balak po naming magtayo ng tindahan para mapalago pa ito.”

When the pandemic came, this mother of two became an instrument of change and a channel of blessing to the Bangon tribe as well as to the Buhi (tribe that also lives in Bansud). “Nakita ko po sila [fellow 4Ps beneficiaries] na labis na naapektuhan ng pandemiya. Madami po ang nawalan ng trabaho. Ipinagbawal po ang pagpunta sa ibang lugar kaya po naapektuhan ang hanapbuhay nila.” Different challenges came along their way that have greatly affected their livelihood and source of income. This includes limitations on mobilization because of the community quarantines and increased transportation costs as protocols in physical distancing have to be followed.

Haydi knew that she must remain steadfast for the tribe. Thus to address these problems, she lobbied and sought help from different partners. One of those who heard her was the Soro-Soro Ibaba Development Cooperative (SIDC). The cooperative has traversed the mountains and brought a rolling store to the Mangyans. “Naging mahal po kasi ang pamasahe pa-bayan. Nasa Php 60.00 po hanggang Php 100.00 balikan. Pang-ulam na po ‘yun sa maghapon. Kaya nakiusap po talaga ako sa kanila na akyatin kami dito”. Because of Haydi, the rolling store has benefitted not only her fellow IP beneficiaries but as well as non-IPs and non-beneficiaries. Aside from saving from the transportation cost going to the town proper, market prices of the goods remained the same.

The 37-year-old Mangyan parent leader also acknowledges that it is not just her who moved the mountains. It is a collective effort of all the people, fellow IP beneficiaries and partners, who want the same for the Mangyans – a community where no one is left behind. She firmly believes that no culture, gender, race nor poverty or even a virus can divide the IPs and non-IPs, rather it unites us.

As of this moment, Haydi’s tribe is planning to officially register the Ufudan Mangayan 4Ps as an organization. She also plans to submit project proposals on livelihood to different government agencies and private organizations. In fact, she will meet her fellow beneficiaries this coming Sunday to convene them and decide on how to grow their funds. 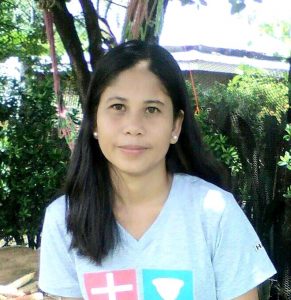 Haydi believes that once you are called to help, your heart will automatically lead you to what you really desire, regardless of how small or big it will be. 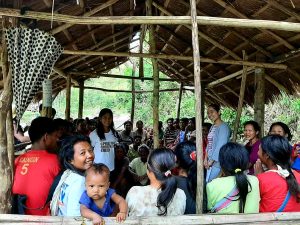 Haydi does not want to be acknowledged as the sole initiator of all the efforts, rather she wants her tribe to think that it is all of them who pave the way to possibilities. 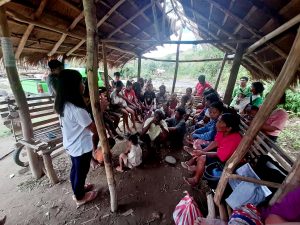 During the development sessions, Hadyi translates their module to Buhi language so her fellow IP beneficiaries can understand the topics.