MALATE, Manila City —- In the recently held 71st Founding Anniversary of the DSWD celebrated by the Regional Office MIMAROPA, a social worker from the Pantawid Pamilyang Pilipino Program (4Ps) at the Provincial Operation Office (POO) in Palawan was hailed as the first-ever Kinang Awardee: Best Social Worker.

Ms. Faith Tabi-Cripino, 4Ps Social Welfare Officer (SWO) III, from POO Palawan has been awarded as the Commendable Social Worker for her notable contributions in the field of social work while performing her functions in the program implementation. 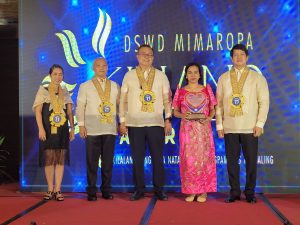 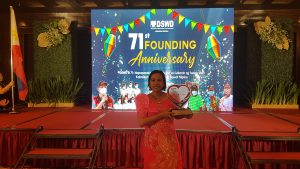 According to Crispino, it was her commitment to provide to the beneficiaries of 4Ps and clients of DSWD the service they deserve and the interventions they need. She also added that despite the many challenges she faced in her past experiences during her stint as a Municipal Link, the learnings she gained and the people she met have inspired and empowered her to do better in the field she has chosen.

Aside from Crispino, many other Regional Staff has been recognized during the 71st Anniversary Celebration held at the Swiss Blulane Hotel for their commendable contribution to the milestones and achievements of the Regional Office las April 8, 2022.

The DSWD Field Office MIMAROPA Kinang Awards is the recently-launched recognition platform where the staff of the regional office are recognized for their #SebisyongMayPusoSaanManSaMIMAROPA. ###