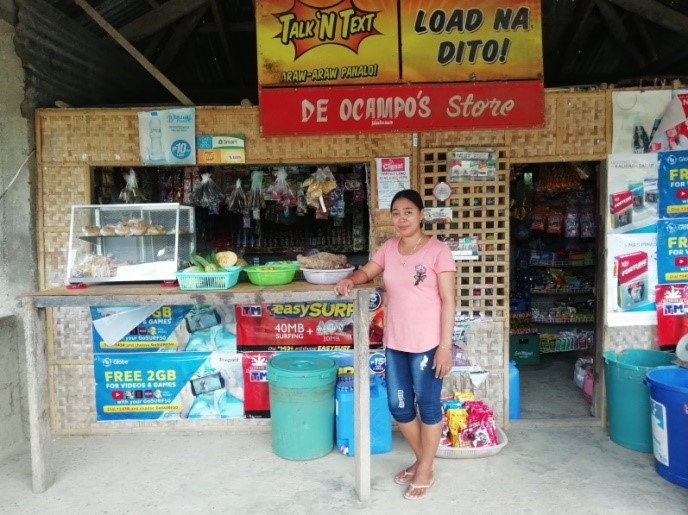 Retail industry is a thriving business nationwide, particularly in rural areas. One type of retail is the convenience store, usually put up in or near the owner’s house, that proves the ‘convenience’ and practicality of working at home.

The PPMC Women’s SLP Association is an organized microenterprise managing a convenience store in the municipality of Sta. Fe, Romblon. The women-led association is composed of 20 members from four barangays – Pandan, Poblacion, Mat-I, and Canyayo hence the acronym PPMC.

Melody F. Ocampo, 20 years old, is the youngest member of the association. She is married and blessed with three children. Her husband has an irregular job while Melody tried her luck in business as she lent capital from the lending service amounting to PHP 10,000.00 that she used to put up a convenience store beside her small nipa house. After few years of living together, Melody and her husband separated. She was left alone to raise the kids as her husband did not provide any support. An opportunity opened to her when the association was organized. She received a Seed Capital Fund which she used as an additional capital in her existing store.

Later on, Melody put up another store along the highway. She rented the lot for PHP 250.00 a month. Years passed and her store gave her a profitable income. Aside from paying her debts from the lending company, she decided to expand her store by selling vegetables such as squash, eggplant, sitaw, and okra. Business expansion did not end here as Melody ventured in retailing of feeds where she saw the demand for it. She even sold gallon of purified water. “Lahat ng pwedeng ibenta at pagkakitaan ay susubukan ko makaraos lang,” she stated.

At present, Melody has already invested in many things including her concrete house, motorcycle, and tuition fee of her kids. Melody is very thankful for the opportunity given by SLP. She has proven that the capital given by the government can be effectively utilized through proper planning, hard work, and perseverance. Melody, a versatile business woman, is an inspiration to other solo parents out there not to give up easily.  ###