Menu
GOVPH
Posted on May 10, 2019 by Claudine Complativo

When the water services in Metro Manila were suddenly cut off early March in 2019, a fiasco ensued.

Residents from all walks of life lined up for water. Social media were saturated with disappointed, angry comments, just like how the streets of the nation’s capital were suddenly filled with rows of water containers, pails, and just about anything that could hold the precious liquid.

But in one of the barangays in the island municipality of Balabac, Palawan, the recent scenario in Metro Manila was the norm – up until the community, Local Government Unit (LGU), and Kalahi-CIDSS project of Department of Social Welfare and Development (DSWD) worked hand in hand for the completion of a water system.

The municipality of Balabac, the southernmost town of the province and westernmost point of the Philippines, is gradually becoming famous for its Maldives-like pristine waters and white sand beaches. Unknown to many however, the town is facing one of the usual but probably the most challenging problem for islands – the scarcity of clean water.

From capital city Puerto Princesa, a trip to Balabac means a four-hour land travel to barangay Rio Tuba in Bataraza. Reaching the port past 8 AM, however, would most of the time guarantee another night’s stay near the area. The tickets for the two passenger boats sell like pancakes. Not surprising though since only these two trips daily cater for the municipality’s 40, 142* residents.

After more or less 4 hours of travel along Balabac Strait and parts of Sulu Sea, Balabac Island, which is only around 50 kilometers to Sabah, Malaysia, would be reached. There, near the gateway to the island lies Barangay Poblacion 1, the island’s center of commerce and government activity.

Poblacion 1, or Pob 1, as people fondly call the area, not just houses the Municipal Hall, the Rural Health Unit and the National Power Corporation, but also the home of some shallow wells – the resident’s source of water.

Holes ranging from 2 to 4 meters deep could be seen near the roadside. Just wide enough for a pail to be brought up and down, these wells provide the residents water for doing their laundry, for washing the dishes, and for quenching their thirst.

The problem though was that these shallow wells weren’t producing abundant water enough to supply the demands of the barangay. On bad days, the residents could only fill one pail every 30 minutes.

Jonathan Montalba, 38, recalled the usual scenario every summer season, the time of the year where the minimal water from the wells became even harder to fetch.

In fact, there was a time that he had to queue for 20 hours just to bring home water enough to make their 30-gallon container half-full.

The 15-gallon water Montalba had fetched was used to wash dishes, for cooking, and for drinking.  Fortunately his family owns a piece of land in another barangay near the river.

But not all 374 residents of Barangay Poblacion 1 were as stark lucky as Montalba. Most of them, aside from those who have their own private wells and those who could afford paying PHP200 for a drum of water, were reliant to the public wells for all their water needs.

And when the heat of the weather clashed with the thirsty residents of the barangay, misundertandings were inevitable.

“Dati nagbabaranggayan pa yan, nagsusuntukan dahil lang sa tubig, nagmumurahan dahil sa tubig (Before, there were cases of heated arguments and fist-fighting just because of water. People were even cursing each other),” said Montalba.

Making and sustaining the “Oasis”

Since November 2018, the residents of Barangay Poblacion 1 were no longer clawing their way through the long queues of pails and containers waiting for their turns. When the Level II Gravity-Fed Water System was finally operational, the residents no longer have to line up for hours for water just enough for their families’ drinking needs.

Now, the residents can enjoy clean water from 14 tap-stands situated within the barangay.

But what has changed in the barangay that led them to find a solution to the generation-aged problem?

When the Kalahi-CIDSS program of DSWD went to Balabac, the Local Government Units, from municipal down to barangay level, community volunteers, and the community members did not let the opportunity of finally addressing their most pressing problem pass.

Montalba, and the rest of the community volunteers, poured all their dedication and commitment to the program since the start of the sub-project. They gave their efforts, time, and even used a part of their meagre income just to make clean water adequate and accessible to their fellow ka-barangays.

Documents had to be submitted on time, barangay assemblies had to be conducted to get the people’s decision, and materials have to be procured. And although DSWD staff were there to guide them, the community volunteers were the lead in every step of the way.

As an island municipality, procurement of materials for the construction of the water system became a problem.

But the volunteers didn’t lose hope and found a strategy.

“Ang ginawa namin hinati-hati namin. ‘Di ba kasi dapat ‘pag kumukha ng supplier deliver on site? Ang ginawa namin, hinati namin yun, nagkuha kami ng supplier, nagkuha din kami ng transpo. Kasi kung isasagot pa yung transpo doon sa supplier, ‘di nila papatusin (It should have been deliver on site, right? But what we did was we find a supplier, and we pay another entity for the transportation. We figured that if we wouldn’t be able to find a supplier who would shoulder the transportation expenses),” said Montalba. 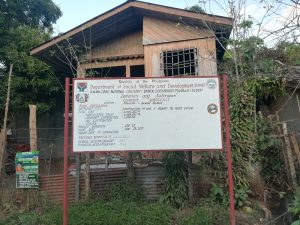 And with that, the construction of the water system was completed.

Now, the volunteers from Barangay Poblacion 1 is making sure every household in their barangay gets enough water.

With the creation of Poblacion One Water System Association (POWSA), an organized group of community volunteers who manages the water system, a scheduling of on and off hours per tap-stand is in placed to ensure proper distribution of water.

For Montalba, however, the Kalahi-CIDSS program gave them more than just clean water.

The water system indeed gave the barangay the clean water they’ve been dying to have and the system that makes their relationship to each other better.

Now, residents of Barangay Poblacion 1 no longer line up for hours. They no longer have to manually bring a pail up and down the well. They can now sleep peacefully at night knowing that there’s enough water in their containers, and the feeling of thirst is just in passing and can easily be quenched. #

Note: The Level II Gravity-Fed Water System of Brgy. Poblacion 1, Balabac, Palawan is one of the sub-projects of Kalahi-CIDSS program of the Department of Social Welfare and Development (DSWD). Through the Community-Driven Development approach, the said sub-project was identified, implemented, and owned by the community.