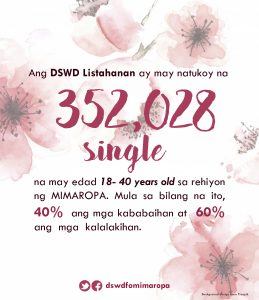 MALATE, Manila– February is known as the month of love. As to celebrate Valentine’s Day, one has to be partnered or married or at least in a relationship. But according to the Department of Social of Welfare and Development (DSWD) Listahanan database, some 352,028  individuals aged 18-40 years old in the MIMAROPA region are single.

Based on the 2015 household assessment results of Listahahan, the government’s scientific way of identifying who and where the poor are in the country, of the identified number of single regionwide, 60% are male and 40% are female.

Single refers to a person who has not been married by any religious and civil rite.

Moreover, the town of Banton in Romblon has topped the list with the highest percentage of identified single with 19.2% (977 individuals) followed by Cagayancillo in Palawan with 19.1% (1,225  individuals) and trailed by Lubang in Occidental Mindoro with 18.9% (3,130 individuals).

Of the identified total number of single, 35.3% or 124,385 individuals are considered poor.