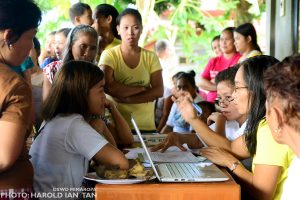 MALATE, MANILA- The Listahanan of the Department of Social Welfare and Development (DSWD) MIMAROPA identifies about 568,387 women of all ages or 45% from the total 1,257,631 women assessed, belong to poor households in MIMAROPA region.

Listahanan is a government mechanism that identifies who and where the poor are nationwide.

The top three towns with the highest number of identified poor women regionwide are San Jose Occidental Mindoro with 37,838; Puerto Princesa in Palawan with 29,843; and Bataraza Palawan with 20,065.

The DSWD database further shows  that barangays with the highest number of poor women are  barangay Bancalaan, Balabac, Palawan  with 4,984; barangay Panaytayan, Mansalay, Oriental Mindoro with 3,847; and barangay  Mangsee, Balabac, Palawan with 3,745.

The National Women’s Month Celebration  every March is part of the worldwide observance of the International Women’s Day with this year’s theme, “We Make Change Work For Women.” ###