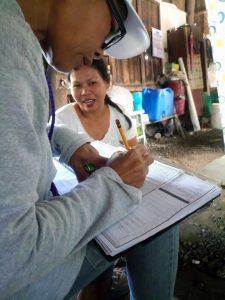 MALATE, Manila- The Department of Social Welfare and Development (DSWD) has completed field validation of Listahanan-identified poor households for the Unconditional Cash Transfer (UCT) in Mindoro, Marinduque, Romblon, and Palawan or (MIMAROPA) provinces.

From the 93,436 household targets, 92,205 households or 98 percent are validated and verified regionwide.

The UCT household validation spearheaded by DSWD- Listahanan started on the second week of March and was officially completed last week of April 2018.  A total of 22,981 households has been validated in Oriental Mindoro; 17,594 in Occidental Mindoro; 6,319 in Marinduque; 7,777 in Romblon; and 38,103 in Palawan.

The Department has hired 392 validators in MIMAROPA who have administered house-to-house interviews for 45 days.

“From the number of nonvalidated households are those unlocated, transferred to other provinces or regions, vacant, and in some cases no available qualified respondents,” said Listahanan Regional Coordinator Ernie H. Jarabejo.

According to validation guidelines, to qualify as respondents they should be at least 15 years old above, member of the household to be validated, and able to verify the accuracy of the household information or profile.

Jarabejo stressed that hired validators have exhausted all possible means to locate and verify those missing households as not to be left behind before the barangay issues certification attesting cases of unlocated or transferred.

Moreover, the barangay council also issued a certification of completion testifying that validation activity in the area is successfully conducted based on standard protocols.

The UCT validation is a mechanism to identify possible and qualified recipients of cash grants as a government’s mitigating measure on the effect of the new Tax Reform for Acceleration and Inclusion (TRAIN) law.

“The said validation aims to assess possible recipients of social welfare cash assistance to poor families who are heavily affected by the increasing prices of basic commodities due to the TRAIN law. Priority targets are non-Pantawid Pamilyang Pilipino and Social Pension Program households,” added Jarabejo.

Meanwhile, DSWD clarifies that the household validation aims not to delist, select and expand new and current Pantawid Pamilyang Pilipino Program and other program partner-beneficiaries.

As of this writing, all validated forms will be encoded for updating of the household profile.

Listahanan is a government tool to identify who and where the poor are nationwide. ###