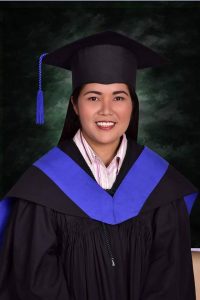 tribe who has been long isolated in the mountains, it was difficult for Juda Diklay, 25, from Tau’t Bato tribe, to keep pace with her classmates in the suburb.

It took Juda years to adapt and connect with other people whom she is not familiar with. Since she was the first of her tribe to attend a formal class, she has no knowledge on how things work in a school system. Further, her distance to her family also added to the difficulty in adjusting her life in the lowland.

“Mahirap po yung nag-aaral ka sa baba na hindi mo kilala kung sino yung mga nakakasalamuha mo tapos malayo pa sa akin yung pamilya ko. Lagi ko na lang naiisip ang mga negative na bagay at sumuko na lang pero napapaisip rin ako kung anong mangyayari sa akin kapag susuko ako agad sa pag-aaral ko (It was really difficult to study in the lowland since I don’t even know the people I am encountering. Adding to that is the distance of my family to me. But when I thought of negative things, I begin wondering what will happen to me if I give up my studies),” Juda said.

She might have been through a lot of challenges, but her burning desire to learn and discover the world around her has helped her in finding a motivation to keep going. Thus, because of her determination and perseverance, she graduated with a bachelor’s degree in Elementary Education, making a history as the first Tau’t Bato tribe member to graduate in college.

Living in the Mountains

A group of people from the Palaw’an tribe living in Singnapan Valley are called Tau’t Bato or Taa’wt Bato. Long before, they live inside the crater of an instinct volcano in Palawan, hence their name which literally means “stone people” or “dwellers of the rock”. Today, the Tau’t Bato tribe lives in their homes made of light and sturdy materials such as saplings. Although they do not live in the caves like before, they still find shelter inside it during rainy seasons when the valley is flooded. Other than serving as a shelter, the tribe also seeks protection from the cave as they go inside it when they hear unpleasant stories from the lowland.

“Napakadelikado po nung mga dinadaanan namin papunta sa mga kweba. Puro bato, at kaliwa’t kanang bangin ang dadaanan para makapunta doon at buwis-buhay talaga. May part pa doon na tatawid ng tulay na kailangan nakabalanse ka kung hindi malalaglag ka talaga (The trails going to the caves are very dangerous. We pass through rocks and cliffs to get there and it’s a really a life-threatening experience. There is a part of it where we need to go over a bridge that if we cannot balance ourselves, we will fall),” Juda shared.

The tribe rarely goes down from the mountain as they survive through gathering wild fruits and vegetables, hunting, planting crops and rice. Their community can only be reached through an 8-hour hike from Brgy. Ransang, Rizal, Palawan. Because of their distance, most of them do not go to school or have access to different health services.

Only Juda’s family was convinced to go down the mountains to study. Juda and her younger brother Jonathan, was able to study in elementary after 5 years of being pursued by a Christian missionary group called, Youth with a Mission (YWAM). The group has been visiting their tribe even before Juda was born to share gospels and encourage the parents to send their children to school. YWAM also visits not only their tribes but also other tribes in Palawan and other parts of the country.

She was already 10 years old when she studied in Ransang Elementary School with her brother. Afraid and curious at the same time, Juda knows that it will be difficult for a girl from the mountains to begin a new life in the lowland.

New Life in the Lowland

Since Juda was the oldest in their class, it was hard for her to socialize with her classmates.

“Ang gawain ko lang po kasi noon, school tapos uuwi na agad sa bahay tapos bahay tapos school lang ulit. Kaya akala ata nung mga kaklase ko ay masungit ako o suplada (What I did back then was go to school then go home after classes are over. That’s why some of my classmates thought that I am snobbish),” she said.

As she gains new friends, there are still others who bully her just because she came from the mountains.

“May mga nagsasabi sa akin noon na bakit daw ba ako nag-aaral eh taga-bundok lang naman daw ako. Wala naman daw akong silbi (There were those people questioning me why I am studying in school even if I came from the mountains. They say that I am useless),” she shared.

Juda was disheartened. She told herself that after graduating in elementary, she will already go home. Enduring the pain, she continuously goes to class, pass her homework on time, and study for exams carrying a heavy heart caused by those people who discouraged her.

Little did she know that her hard work will pay off as she was announced as their class Valedictorian.

This event motivated her to continue high school. She was sent by YWAM to Puerto Princesa to study.

Since it was her first time in the big city, it was still uneasy for her to find new friends. And as she was expecting, there are still those people who want to test her determination.

“Nung high school naman po ako, may kaklase ako na sinira yung project na gawa ko dahil nauna akong magpasa sa kanila dahil hindi pa sila tapos at nauna ako sa deadline. Umiyak lang ako noon pag-uwi tapos gumawa na lang ako ng panibago at nagpasa pagkatapos nilang gawin yung kanila (When I was in high school, one of my classmates tore down a project I made because they were not finished yet and I passed mine before deadline. I cried when I got home. I made again another project and passed it after everyone are done with theirs),” she narrated.

Only negative things come to her mind during that moment and she wanted to go back home so badly after experiencing all those pains. Every day after school, she packs her things telling herself that she is ready to go home. She said that she sometimes asks herself, “masama bang mangarap ang isang taga-bundok (is it bad for someone from the mountain to dream)?”

During the hard times, it was only her friends and the people of YWAM who keep on motivating her. She share her stories and heartaches to other scholars of the group whom she knows can understand her.

As she was barely getting through with the difficulties she experienced, Juda was still able to finish high school. Once again, she thought of giving up but the people believing in her ignite her desire to continue with her dreams. And although Jonathan, her brother, went back home after they graduate in high school, Juda went on with her journey as a student.

“Sa totoo lang po napaisip din ako noon kung itutuloy ko ba kasi pataas na nang pataas yung level at pahirap na rin nanga pahirap. Minsan natatakot ako nab aka ganun ulit ang mangyari sa akin (The truth is I think of whether continuing because the difficulty is getting high as I leap from one educational stage to another. Sometimes, I fear that those things might happen again),” she said.

Once again eager to experience and learn new things, Juda took up Bachelor of Elementary Education at the Western Philippines University in Puerto Princesa.

After years of staying away from home, Juda became confident of having new friends. This time, she discovered that in college, all of them are unique and no one will indicate their faults of being different.

When Juda was in college, YWAM continued supporting her needs financially but there are still those times when she thought of getting a job to at least acquire even a small amount of money to help her family in the mountains and buy other things she needs in school. This is because the allowance given to her, is still not enough for her needs as her year level moves up.

“Wala po akong mga libro nun. Nagpapaxerox lang ako kapag kailangan naming ng libro at pag may project, hihintayin kong matapos mga kaklase ko para ako naman ang makagamit ng libro (I don’t have any books that time. I usually photocopy pages from the books of my classmates and when we have projects, I wait for my classmate to finish theirs so I can borrow their books).” Juda said.

It was then when Juda became one of the grantees of the Expanded Students’ Grants-in-Aid Program for Poverty Alleviation (ESGP-PA) of the Pantawid Pamilyang Pilipino Program. Juda was given P30, 000.00 for the first semester to cover for her tuition fees and other school fees such as textbooks, board and lodging, etc.

“Nagulat po ako noong nakuha ko yung pera kasi first time ko pong makahawak ng ganoon kalaki. (I was shocked when I was given the grant since it was my first time having such large amount of money),” she exclaimed with joy.  With her grant, she was able to buy all those books that she needs.

It was not only Juda who has been supported by the program. Her family became a Pantawid beneficiary in 2010 and because of it, Noah, one of her younger brothers was able to go to school through the cash grants they receive. He is now studying in Grade 3 at Ransang Elementary School.

According to her, “napakalaki ng pagbabago sa amin sa Tau’t Bato noong dumating ang programa. Nakapag-aral ang mga bata kasi kailangan at nakakapagpacheck-up na sila (there are many changes in our community when the program arrived. Children are able to go to school and take regular check-ups because it is needed).”

Juda’s father also became the only Barangay Health Worker (BHW) in Tau’t Bato to monitor compliance of their community in terms of the health conditionality since he was the only one who knows how to read and write. On the other hand, Jonathan was able to get a job in the program as a Social Welfare Assistance (SWA) of the Modified Conditional Cash Transfer (MCCT) catering to the Indigenous Peoples.

“Siguro kung nagpadala ako sa mga negative na naiisip ko noon, hindi ako nakapagtapos at may asawa na ako at anak, (If I did not overcome my negative thoughts, I won’t be able to graduate and I already have my own family now),” Juda said.

When asked what she will do after, Juda said, “babalik na po ako sa amin at magtuturo ako doon. Ipapakita ko sa kanila kung gaano kahalaga ang edukasyon, (I will come back home and teach there. I will help them realize the importance of education)”.

Juda vows to use what she has learned to improve not only her family’s life but also the lives of other people in her community. She does not want people to belittle them just because they live in the mountains and do not know how to read and write.

Being the first from her tribe to graduate in college, Juda is now an inspiration to the people of Tau’t Bato in recognizing the full worth of education in overcoming the hardships in life brought about by poverty. ###